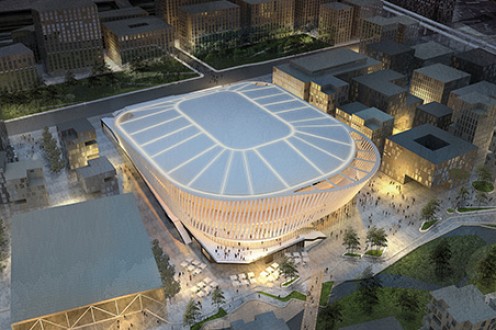 Copenhagen Arena is a multifunctional arena of international standard accommodating 15.000 spectators at sports events and concerts on a large scale. Situated in the southern part of Ørestaden between apartments and commercial buildings the arena balances between playing an important role in the local community and being a national cultural landmark. In the proposal for Copenhagen Arena, the undulating veil of the façade creates a characteristic iconic look while the round shape of the building and its human scale avoid dominating and overwhelming the surroundings.

One of the key intentions with Copenhagen Arena is to animate and activate the neighbourhood outside of the time with events and shows. By creating a diverse landscape surrounding the arena, including skateboard ramps, picnic-area beneath the trees and meandering canals, the public is invited to dwell in the landscape and use the space around the arena on a daily basis. An encircling plinth forms a plateau from where you can explore the building on a closer range and enjoy the panoramic view. Situated at ground level you find the open foyer with cafés and shops directly connected to the outdoor area.

Hidden behind the rippling façade one finds the arena itself, where the intense experience of a show takes place. Its bowl-like shape enfolds the viewer and frames the intimate concert or exciting sports game.
Simple logistical solutions such as underground parking and a large loading bay in the back makes it easy to access and leave the building and thus also to avoid the – when speaking of stadium arenas – often generated traffic congestion. The entire building is founded on sustainable solutions and offers the optimal possibilities for creating a carbon neutral building.