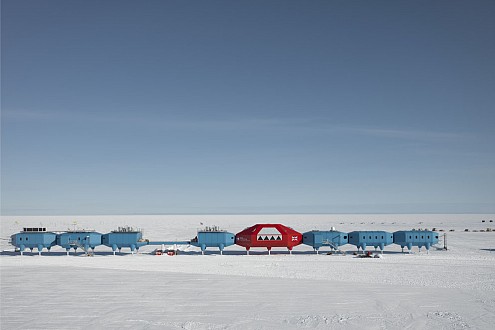 Halley VI Antarctic Research Station demonstrates an ability to create ground-breaking architecture characterised by a compelling concept, executed with fastidious attention to detail and exemplary levels of coordination. Pushing the boundaries of design in a life critical environment, it creates a beacon for sustainable living in the Polar Regions to draw attention to some of the most significant science conducted on our planet.

The challenge was to create excellent laboratory and living accommodation that was capable of withstanding extreme winter weather, of being raised sufficiently to stay above metres of annual snowfall, and of being relocated inland periodically to avoid being stranded on an iceberg as the floating ice shelf moves towards the sea.

The new research station, which replaces the 20-year old Halley V facility, is the sixth to be built on the floating Brunt Ice Shelf in a region that has established itself as an important natural laboratory for studying the Earth’s magnetic field and the near-space atmosphere. It was data from Halley that led to the 1985 BAS discovery of the ozone hole.

The £25.8 million station is built with an innovative concept featuring hydraulically elevated ski based modules, ensuring the station can be relocated inland periodically as the ice shelf flows towards the sea. The station combines seven interlinking blue modules used for bedrooms, laboratories, offices and energy plants, with a central two-storey red module featuring a double-height light filled social space. Interiors have been specially designed to support crew numbers ranging from 52 in summer to 16 during the three months of total darkness in winter when temperatures at the base drop as low as -56C.