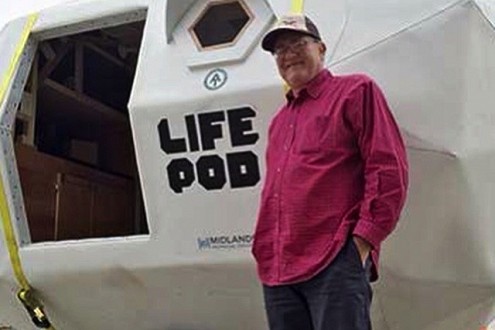 The average home in the United States is 26 hundred square feet.

Now imagine living in a house one-seventeenth that size.

"People are amazed that there's this large shower you can stand up in, they can't imagine there's this much space in a thing this small," said Michael Weekes as he peered into his 115 square foot creation.

He's named it "Life Pod," and he says it's the tiny home of the future.

"People are trying to do more with less, and we have a greater sense of the earth and how we've got limited resources," he said. "We have learned that over the last 50 years, but now things are becoming critical."

The Life Pod weighs only 1500 pounds and sits on on a jet ski trailer. But inside: a full kitchen, a bed, a toilet, a shower, and storage space.

Weekes created the pod right here in Columbia. He has been driving the prototype around the midlands to get input from the public before going to production.

First, baby boomers who want to travel after retirement.

Second, people who need shelter during emergency disasters, like the October flood.

Third, millennials who want to travel as they decide their futures.

And last, the homeless and displaced.

"Maybe life pod could be at least a temporary solution to get someone in a nice clean sanitary place so they could have some time to get some clothes, job interviews, and transition out of homelessness," Weekes said. "Life pod for me is a dream come true and I think it triggers that same wander-lust that we all have."

The pods will be made right here in the Midlands, and they'll sell for about $15,000 each.

Weekes says it's a small price to pay for the tiny home, and the endless adventures it can bring.

"I think there's an artist inside all of us," he said. "All of us go to work every day and put up with the situation and some of us have even given up on our dreams. Life pod reminds you that dreams can come true, and I think that's the most exciting part of all."