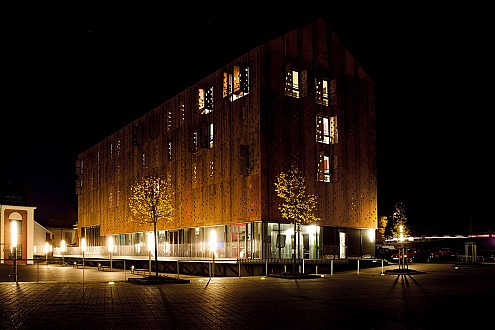 Performers House which was completed in 2007 is an international dance, music and theatre folk high school located in Silkeborg on the banks of the Gudenaa River. The building was designed to connect the school to the town by offering a vibrant environment for the local community, including cafés, a music theatre, cinemas and a media centre.
Performers House is located in the heart of the paper factory’s old and reborn industrial area. The original boiler house has been modernised and now accommodates a winter garden, teaching rooms and rehearsal rooms while the adjacent open plaza connect the historic building with its modern counterpart. The open plaza can be divided into intimate public spaces where the interplay between the school and its urban surroundings can unfold. A new building has been constructed to house the main entrance, a dance stage, offices, a canteen, a student café, a kitchen and student accommodation; the new squares on each side of the new building reinforce connections with the local community, acting as foyers, stages, rehearsal rooms and interval spaces.
The architectonic style and the materials used are simple and heavy. The new façade is clad with perforated rust-red steel panels, and this was a calculated choice in order to create a simplified building with a volume expressing the area’s industrial cultural heritage. A simple and strong – and in time glowing – red sculpture imitating tradition in a very modern way. Thus, the building fits into the existing context and history. Crisscrossing sight lines expand horizontally through the building and vertically up through the storeys. The dividing lines between the inside and the outside and between the elements in the school’s organism are under continuous processing.
After dark, light shines through the incised apertures, turning the building into an animated beacon. The ground floor of the new building has a versatile façade; shutters on the main stage can be moved to one side while the large glass sections can be opened, thus transforming the external balcony into a performance arena. Along with the red curtains that can be opened and closed, this gives unlimited opportunities concerning the lay-out.
The school’s international talent (half of the students are from overseas) and Silkeborg’s local culture interact to create music, dance and theatre performances on this urban stage. Performers House is a folk high school whose physical form is as dynamic as the pulsating life that is lived inside the building.