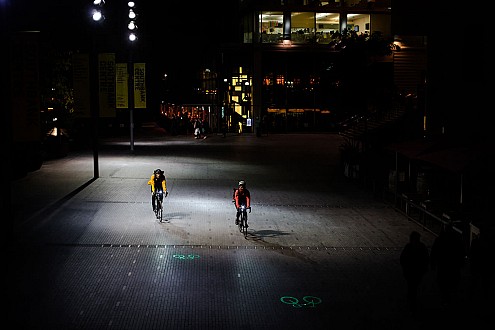 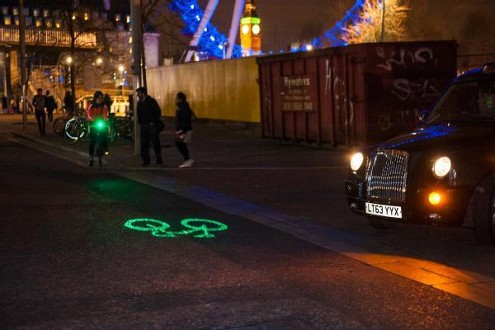 Blaze, the pioneering brand for urban cycling, has created the Laserlight, an innovative product that helps to improve cyclist’s visibility over and above any other bike light on the market. It does this by projecting an image in front of a bicycle to increase your footprint on the road, alerting drivers and other road users to your presence and making you visible when otherwise invisible. A study conducted by the Transport Research Laboratory recently concluded that the Laserlight makes you 96% visible to bus drivers at night compared to 74% with a normal LED light.

By projecting the image of a bike ahead of the rider, the Laserlight tackles the biggest risk to urban cyclists – vehicles turning in front of their path when travelling straight ahead – which is the cause of 79% of cycling accidents. Data proved that the biggest risk to the rider is in front of them and mitigating this risk was the guiding principle for the product.

A huge advantage of cycling is the bicycle’s tiny footprint on our cluttered urban roads. However, this can become a problem when a bicycle virtually becomes invisible in a driver’s blind spot. Cars, buses and HGVs occupy a much more prominent position, and as such get treated to more space. Urban cyclists can feel like the most microscopic of road users unless they have a means by which to increase their footprint and visibility.

Alongside all its safety benefits, the Laserlight was designed to be as effective as it is elegant.  It’s patented, award-winning design makes it intuitive and simple to use as well as being easy on the eye. Manufactured by PCH, major suppliers for Apple, Beats & Xiaomi, its casing is made of beautiful aircraft-grade aluminum. 100% waterproof and built to withstand extreme vibrations, it is tough enough to survive the rain, wind, the grit and the potholes.

The Laserlight is easy to operate with gloved hands, wet hands, cold hands and even with one hand - that’s all you need to unclip the light from the handlebars. The smart control panel lets you know how much charge the Laserlight has so there’s no need to be caught short by flat batteries. And when it’s running low, charge it efficiently with the magnetic USB cable.

- The laser is green because the human eye is most receptive to light of that wavelength (530nm).

- The Laserlight is not just the laser, it is also a white super-bright LED front light that works in flashing and constant modes and at two brightness levels (100 and 300 lumen).

- The batteries are lithium Sony cells, meaning that charge and discharge time is accurate. Also, they are powerful units and resilient enough to survive a summer of storage.

- Indicator lights mean that you can always check the power level in the battery, before, during or after a ride. And the Blaze Laserlight will always get you home. The power save mode, when the battery is 95% depleted, gives you an additional four hours of riding time before needing a charge.

- Thanks to the unique charging contacts, the Laserlight is fully sealed and waterproof. You could submerge one in up to 1m of water for over an hour!

- Bracket made of marine-grade steel, which will never rust